hi Well, after not a very nice year I will again try to go back to blogging. I have missed it so. I will only be able to do a couple of times a week not like before when it was almost every day. So, will see you all again soon
Posted by Annette at 1/26/2013 02:43:00 pm No comments:

I know I said I would start blogging again but the funny thing is I have nothing to blog about.
Isn't that funny? Usually, I have plenty to say.
There's a few problems at work but nothing much.
I'll have to start thinking what to blog about!!!
Posted by Annette at 8/10/2012 08:34:00 pm No comments:

I'm sorry I haven't been posting but as I said there is a reason and it's because I've been in hospital.
I have had to have a hysterectomy.
The reason for this is because I had cancer.
It started last year, when I started to bleed, not heavily but it was every day, well, as we women don't, I didn't rush to the doctor.
As you probably know that when menopausing all different things happen and it gets to the stage when you just put up with it which is exactly what I did and believe it or not I'm glad I did.
The reason is because when I eventually went to see my doctor he sent me to see a consultant, she was private actually but they take NHS patients as well.

I told her it had been going on for months but because of work and looking after geoff, he had a knee op the year before and was struggling with it, I didn't bother with it, it was more a nuisance than anything. So, she booked me in for an internal examination, just for a day, I was sedated and was treated at the private hospital, it was great, You are treated like a queen!!!
Anyway, she was happy with it and told me she took an biopsy just to make sure.
To cut a long story short, the biopsy came back and yes, I had cancer.
The doctor could not believe it, she couldn't see anything wrong and was totally surprised.
The cancer was so new!
That's why I'm glad I left it now, if I had gone when it first started it would have been missed. The biopsy would have been negative and I would have had this cancer and nobody would know.
I must say that I was in no pain at all.
I did not stay private for the operation I went to a NHS hospital for that and the male doctor I saw was lovely.
So, after a couple of weeks I went in for the hysterectomy and they removed all my bits and pieces and the cancer.They took another biopsy and that was clear.
They were brilliant!
The laugh is I hadn't got a lot left anyway, because thirty years ago I had two ectopic pregnancies and they had to operate both times. I had my right ovary and phelupium(not sure how to spell that!) removed.The second time they had to operate but nothing was removed that time.
Anyway, back at work now, and I will be seeing my doctor in august.
They will keep me under observation for 5 years now.
So, that's it, and I will now be blogging again now I am back to normal, as they say.
Posted by Annette at 7/22/2012 10:41:00 am 2 comments:

At last!!!!!!
I have been trying to get on here for days, no, weeks really, because I had to change my email address it wouldn't let me post anything, I couldn't get on this page.
I would like to start posting again, the reason I haven't is because I have not been well.
I am fine now and back at work but I will explain everything to you if I can get back on here!!!!!
Posted by Annette at 7/15/2012 07:44:00 pm 1 comment:

I have now changed my email address so could you please delete my old one and hopefully you won't get anymore of those dreadful emails.
thankyou.
Posted by Annette at 5/09/2012 10:09:00 am 1 comment:

Well, that was a good start wasn't it?
Went to work wednesday and I started to get toothache, thought nothing of it just took a couple of painkillers and left it.
Wednesday afternoon it got worse and yes, you can imagine what I'm going to say, by wednesday evening I was in agony.
It got that bad geoff took me to the local hospital thinking there would be an emergency dentist on call.
We got there about 9.30 pm and registered in to be told they wasn't an emergency dentist at all.
The nurses seeing the pain I was in gave me two tablets and thankfully after about an hour the pain eased.I saw a doctor who told me he could not do anything as he was not a qualified dentist, but he did take time to talk to me about it and said he would have a look at it. He turned round a brought one of those great big lights to shine into my mouth but it didn't work.
Anyway, he looked and said what I thought had happened, the tooth had just split and was nearly gone.
So, he sent me home and I went to the dentist the next day when they opened at 9am.I explained that I had been to the hospital the night before and saw a doctor.
They took an x-ray and said the same thing.The tooth had just broke and was crumbling away.
I could either get it re-made, so to speak or have it out.
Well, it would cost £500.00 to have it done so you can imagine my reply.
"Let's take it out, shall we?"
I was quite happy about that cause no more pain.
What I didn't realise was just how bad it was going to be.
You see,the tooth was the great big one at the back on the top.
She removed it and when the freezing had worn off I was just in so much pain as I was before.
OH dear.
She did worn me about this because of where the tooth was it is near your sinuses and it can turn nasty.By that she meant an infection. So she gave me a course of anti-biotics as well, these I have took and luckily nothings happened, in other words, no infection.
I had 2 days off work with this.
However, today is better I'll just keep taking painkillers.
It will take time to heal, me thinks,.
So, that was a brilliant way to start the new year, wasn't it???
anyway, get over this and I'll be fine.
I HOPE!!!!!!
Posted by Annette at 1/20/2012 09:21:00 pm 2 comments:

Well,after the horrible year last year I thought we will start this new year with a better outlook on life.
It's not that anything bad happened last year, I was just restless. I suppose that is what you would call it.
The amount of times I sat here wanting to blog about things but just could not think of how to say it. Which is unusual for me, as you probably know, I don't normally struggle do I?
LOL

Annette
United Kingdom
I am 52,married with no children,I work in a supermarket. 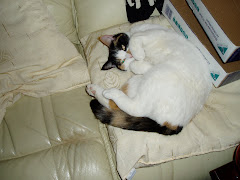